by Luuk Nijman
Consulate General of the Netherlands in Miami

Whether it’s baseball or soccer, the Netherlands and the US share a passion for athletic performance, and we cheer for our teams. We also share a continuous drive for innovation and technical excellence, which is the driver of those athletic achievements.

On March 13-18, a group of Dutch sports organizations, united under the banner of SportsNL, came to Miami for this exact purpose: to work with our partners in the US on innovation in sports.

The focus of this mission was Soccerex, a major conference and two-day event in the global soccer industry. A SportsNL pavilion formed the orange heart of the event and served as a platform for introductions to American counterparts, meetings with potential clients, and presentations on the US sports market.

Soccerex was another milestone in the “SportsNL @ Soccerex” trajectory that the Consulate General of the Netherlands in Miami launched in the summer of 2021, in close cooperation with partner organizations (the Royal Dutch Football Association (KNVB), the Johan Cruijff ArenA, SportInnovator, and Orange Sports Forum).

With one-on-one introductions, workshops about the US sports market, and tailor-made advice to individual organizations, Dutch sports organizations have been supported in their US ambitions. SportsNL @ Soccerex grew into a group of more than 70 delegates who came to Miami, a pavilion with a SportsNL Café, six company stands, a demonstration project by Active Esports Arena, and conference sessions with the KNVB and Johan Cruijff ArenA.

At the NSU Levan Innovation Center, Dutch sports tech startups pitched their products to local experts. Many connections were made at Soccerex and during these visits. The Consulate General in Miami will now follow up on these various connections and cultivate potential partnerships.

Soccerex was the first time that a mission abroad was organized under the header of SportsNL. The US is the largest sports market in the world, totaling $550 billion, where soccer is rapidly growing. The US sports industry is expected to further expand toward the 2026 soccer World Cup and the 2028 Olympics in Los Angeles.

SportsNL @ Soccerex was part of a three-year partnership with Soccerex, so the Dutch will certainly be back! Check out photos from the event: 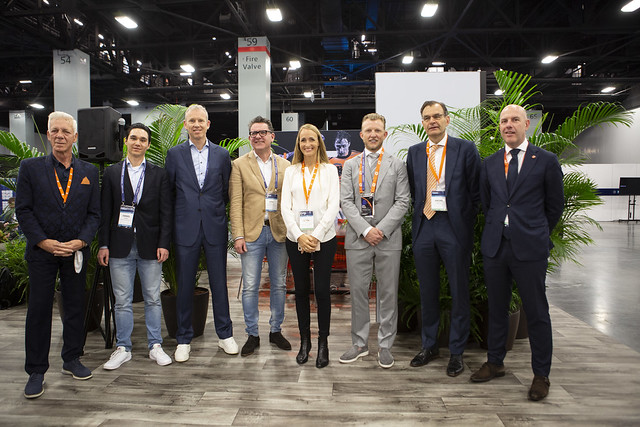