X
100,000 free tulips turn the heart of San Francisco into a pop-up garden

The Netherlands is recognized worldwide for its expertise in agrifood and horticulture. The Dutch export more than 1 billion flower bulbs to the United States annually. The tulip bulb is the most popular bulb species with 450 million bulbs sent to the US. Other popular flower species exported by the Dutch include lilies, daffodils, hyacinths, and gladioli. The Dutch export nearly 100 species of flower bulbs around the world annually.

American Tulip Day, organized by the Embassy of the Kingdom of the Netherlands, Royal Anthos, and iBulb, was designed to create a California version of National Tulip Day, which is held every January in Amsterdam.  American Tulip Day serves two purposes: to give San Franciscans a glimpse of spring in the heart of winter and highlight the strong relationship between the Dutch and American floral industries.

About 40% to 50% of Dutch flower bulbs exported to the United States are purchased by consumers who plant the bulbs in their gardens and by municipalities that plant the bulbs in public parks. The other 50% to 60% of Dutch bulbs are sold to garden professionals who grow bulbs in their greenhouses for the production of cut flowers that are then sold to retailers.  The tulips used for American Tulip Day are supplied by a California grower.

“American Tulip Day is the perfect example of Dutch horticultural expertise and American ingenuity that creates a thriving partnership of success,” said Gerbert Kunst, Consul General of the Kingdom of the Netherlands in San Francisco. “Every year, a multitude of new tulip varieties are cultivated in the Netherlands that are ultimately used to beautify households, gardens and public spaces throughout the United States.”

The success of the Dutch bulb sector in the United States is rooted in longstanding cooperation with the US Department of Agriculture and innovation fostered with American universities. Dutch imported flower bulbs are delivered to the US under the USDA pre-clearance program. For more than 65 years, Dutch bulbs have been inspected in the Netherlands by officials of the USDA’s Animal and Plant Health Inspection Service before shipment to the US. The Dutch bulb sector also partners with Cornell University’s Flower Bulb Research program to spur innovation in the US.

“American floral producers bring Dutch bulbs to life, and San Francisco’s Union Square is the premiere location to display the bounty and variety of the Dutch tulip,” said Henk Westerhof, Chairman of Anthos/iBulb. “We truly hope that San Franciscans enjoyed American Tulip Day. These American-grown flowers produced from Dutch bulbs signal that spring is on its way.”

American Tulip Day is part of public diplomacy programs by the Embassy of the Kingdom of the Netherlands in Washington, D.C. Later this month, the embassy will highlight the importance of the Dutch horticulture sector when it holds Tulip Week, a slate of events at the residence of Dutch Ambassador Henne Schuwer. Tulip Week will include a green wall and 10,000 tulips and flowers that are locally produced, as well as imported from the Netherlands on display. The series of events will showcase Dutch innovation in horticulture and focus on sustainable urban deltas. 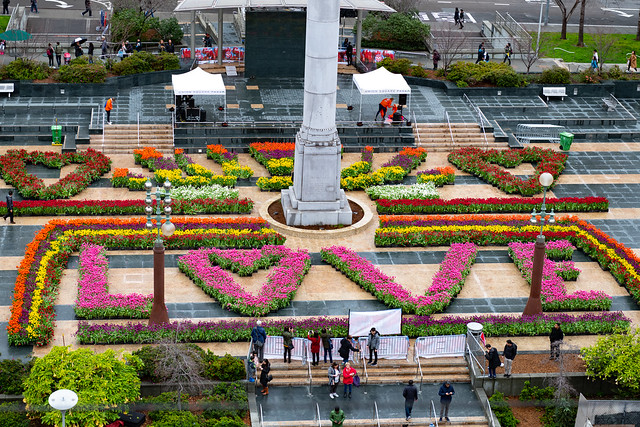